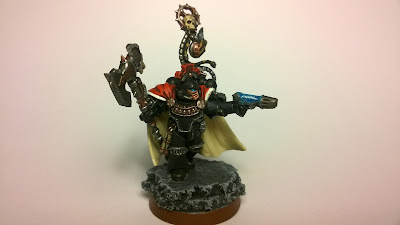 Hello and welcome! You might have seen my previous Betrayal at Calth update posts and this is going to be the one of two last updates. As you can see I've decided to paint all of these models as Iron Hands marines. Because of that I had a little problem with this guy, Kurtha Sedd. He is a chaplain, a type of the unit that fits the role of Word Bearers perfectly. So how could I make this model look good amongst Iron Hands, who don't use chaplains? Well actually they do use a similar unit, a chaplain who is also a techmarine - the Iron Father.
And that's how I've decided that this model will be representing the Iron Father figure. But how could I make it look more like an adept of the Adeptus Mechanicus? Well first thing I thought was the symbol of the chaplains office - the Crozius Arcanum. Iron Fathers don't use this type of weapon and instead the have a weapon that is used by other people connected to the Adeptus Mechanicus. What is it? 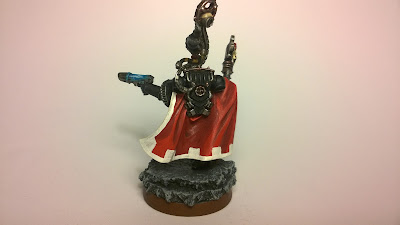 Take a look at all of the techpriests and techmarines, almost all of these models have a Power Axe - and this is what I was looking for. I've used the power axe from the chaos termie lord set, I've cut it so it could fit this models original weapons shaft and I've added half of the cog to make it look more like a weapon of the Adeptus Mechanicus member (and this part was... well, the closing cap of a toothpaste - I knew it would come in handy some day!). 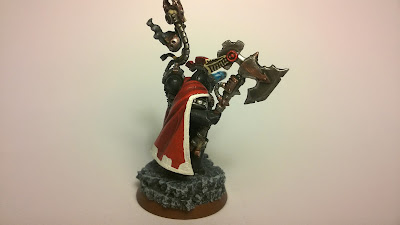 Since the one side of this cog looks a bit different than the other I've decided to put the purity seal up there to cover it up a little. The last things I did to make this model look more like a techmarine was painting the cape red with white cog-like elements and cutting his plume on the helmet to resemble the cog (I thought that I could actually use the cog-plume from the Skitarii Rangers kit but it was way too small). And the final touch to make this figure look more official and important I gave him a little fellow - the servoskull from Tempestus Scions set - it even has X on it's forehead and X is the roman number of tenth legion - the Iron Hands! Could it be more perfect? 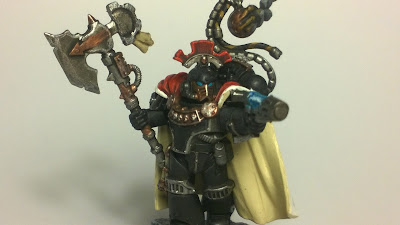 I really enjoyed making this miniature - having such an unique models is a really nice feeling. The original Kurtha Sedd is amazing but I got myself something better for me, something personal.

And now a little special bonus - the original Iron Father model! I thought it would be great fun to make this one and add him to my collection. 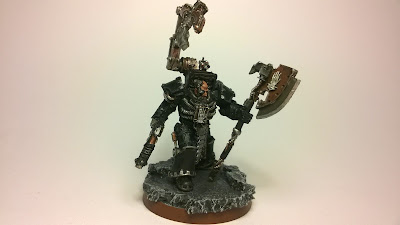 I really like the fact that he has cataphracti terminator armour - he looks amazing surrounded by other terminators! (and I can tell you now - the last BaC update will be about another group of termies, I couldn't resist getting another squad of them, I just wanted so much to make melee squad this time!) 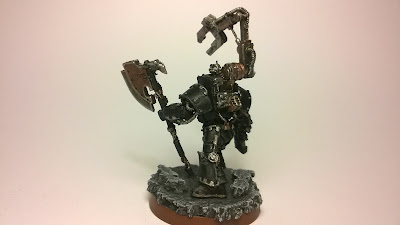 And here it is, the Iron Circle of the Clan Innean - Captain and his two advisors, the Iron Fathers! 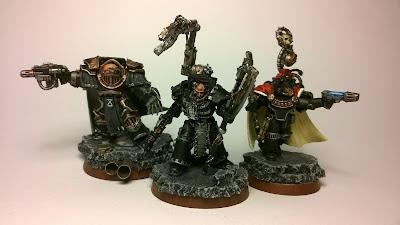 Follow MDF by Email to get the newest posts!